A recent Speak Previews® discussed using Freytag's Pyramid as a way to plot a story, a way to decide which events to include and where to place them. Using the five components of the pyramid diagram can help speakers and writers create a story that builds toward a climax and then falls toward its resolution.

It helped one speaker do just that as he prepared a presentation for management in which he planned to propose that they consider adopting a process that few organizations in his industry had tried. The crowd was clearly going one way while he had a solid argument for trying another.

Although he could have used this story at the beginning or end of his presentation, he chose to use it about a fourth of the way through. He began with the disappointing results of the process currently in use, told the story, and then moved into the better results that the new process promised.

Here's his finished story, one based on the plot points he charted on the pyramid:

If you've ever been at Penn Station waiting for an evening train, you know the drill. You and hundreds of other commuters sit, stand, or bounce around a noisy, narrow waiting room, your eyes glued to the display screens, poised to run for your train the second the screen tells you which track it'll be on. I'm there every weekday around five o'clock or six, ready to head home to Jersey. Have been for years.

One day not long ago, I was waiting, ready to shoot to the left or to the right, depending on which track I'd depart from. The second the display screen showed my train leaving from Track 8, I jumped to the right and took off, running for the stairs to get down to the platform. Hundreds of other people made the same move, a mad horde of us stomping down stairs or elbowing each other on the escalator steps. Nobody wanted to miss the train. Everybody wanted to make sure to get a seat.

I got to the bottom of the stairs and with the crowd surged onto the train.,

I moved to the far wall and caught my breath. After a moment I noticed that the train's interior was yellow. Maybe orange. My train to Jersey was always blue inside. I wondered when they got this new decorating scheme. But then my heart lurched.

"Where's this train going?" I asked somebody.

"Not on this train," somebody else laughed.

For a moment, I just froze, confused. Then I looked out the door. Across the platform I saw a train that was blue inside. I saw a sign that said "Track 8." I yelled. I ran. I jumped out of the Delaware-bound train just before its doors closed. I tore across the now nearly empty platform. I hopped on the Jersey train, my train, its blue walls and seats one of the greatest comforts I have ever known.

You can probably guess that I'm more careful now. I check the track signs before I board. But the big thing is that when you're too quick to go along with the crowd, you may be headed towards a place that isn't where you wanted to go.

While his presentation followed an overall compare/contrast model based on evidence, his story provided the rhetorical advantages of audience engagement and figurative language. Its effectiveness became clear with the first comment during Q&A: "So we might be on the wrong track?"

That was it, exactly. 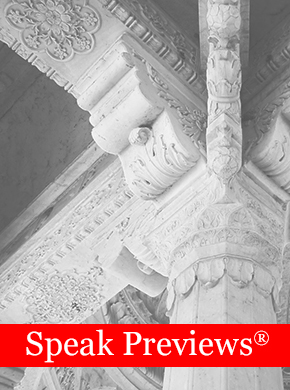