"I just read an article by Warren Buffet," the presenter said as he discussed an upcoming presentation with his communication coach. "What I noticed is that he used stories, lots of them. Can't I do that? I already have one in mind."

The purpose of his presentation, he added, was to persuade management to consider adopting a process that few organizations in his industry had tried. The coach assured him that a relevant story in a presentation or written document often provided persuasive power. He frowned and then laughed. "Big problem is, I don't know how to tell one."

"What's the story?" she asked.

He told her the story—basically a sequence of events, as are all stories. But relating a sequence of events is not enough if the story is to have a purpose, a reason to be told, a point to be made. No one finds a pointless story compelling or even interesting, no matter the venue.

A story needs a plot, a narrative arc, among other elements.

As you probably remember from your many years in school, the plot or storyline is the arrangement of events in a causal pattern. It moves characters from their normal state through a conflict that is then resolved, somehow changing them.

The coach worked with the presenter to arrange his plot according to Freytag's Pyramid, a diagram of story events or actions. Gustav Freytag, a 19th century novelist and playwright, devised the diagram as a way of charting a narrative arc. It has five parts and serves as a good starting point for a storyline and as a map for getting from start to finish.

1. Exposition (character's normal life as it relates to the story until an "inciting incident" occurs, pulling the character into conflict): I'm at Penn Station, it's about five o'clock, I'm waiting for the train home to Jersey, waiting for the display screens to show the track my train departs from, I'm one of hundreds of people waiting.

2. Rising Action (events that cause difficulty as the character struggles to reach a goal): The second the screen shows my train leaving from Track 8, I jump up and run for the stairs to get down to the platform along with hundreds of other people, a mad horde stomping down stairs, elbowing each other on the escalator steps so they don't miss the train, so they can get a seat, I get to the bottom of the stairs, still with the crowd, we all surge onto the train.

3. Climax (the turning point, the place at which the essence of the conflict is revealed): I move to the far wall and after a second realize that the train's interior is yellowish, my train to Jersey is always blue inside, I ask somebody where this train is going, Delaware, he says.

4. Falling Action (what happens as the character copes with the conflict): Delaware? I ask, I'm going to Jersey, not on this train somebody says, I look out the door, see across the platform a train that's blue inside, see a sign that says "Track 8," jump out just before the doors close and get on the Jersey train.

5. Dénouement (problems are resolved; the character returns to normal life or a "new normal" one in which he has somehow changed): I check the track sign before I board! But the big thing is that when you get swept up in a crowd you're liable to be headed towards a place that isn't where you want to go.

That's the presenter's plot. Our next Speak Previews® will show you the story he crafted from it. 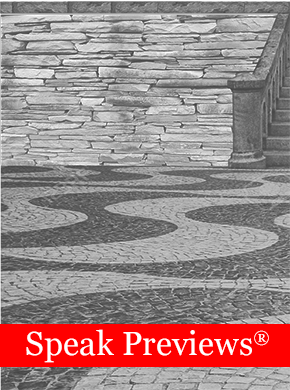