We thank you for your comments and responses to Speak Previews®and the communication strategies and tactics it covers. Here are a few of the topics you’ve mentioned.

Among the persuasive tactics Dan Pink discussed during a recent keynote address was that of mimicking listeners’ gestures. One attendee mentioned this practice and asked for a little more about it. We’ve written about it under the title “Mirror Me.” The basic tenet is that mirroring (or mimicking) the posture, gestures, words, facial expressions, or tone used by another can help you build rapport and affirm relationship. Mirroring sends a message of interest and respect, a desire to remove any obstacles between you and the listener.

It’s not possible to mirror all your listeners if the audience includes a hundred or two of them. But you can pair mirroring with eye focus, reflecting the facial expression, for example, of a listener on whom you are focusing. In a Q&A session, meeting, or individual discussion, mirroring will be easier. Reflecting the pace or inflection of a listener’s words places you both in mutuality, on unspoken but communicated common ground.

Another influential tactic is to use the persuasive strategies ethos, logos, and pathos in a measure that will effectively engage your audience and thus get your messages heard. While many documents and presentations do allow you to use all three strategies, Pink suggests that when your audience comprises people whose status or power is greater than your own (“persuading up”), such as an FDA Advisory Committee, your best strategy is logos, an appeal to logic and reason. That suggestion is based in part on his beliefs that people in powerful positions do not easily take another’s perspective, and dealing with the brain is less problematical than dealing with the heart.

“I couldn’t see my notes,” a presenter wailed, recalling a harrowing presentation experience. She had written her notes in such a small font that she had to lift them to within inches of her nose to read them. “It was not my best moment,” she recalled. “I got even more nervous.”

She had neglected to exercise the guidance contained in the “What?” section of “To Note or Not,” the part that reads “Print legibly in black ink or use an easy-to-read font; make the content of each note large enough so you won't have to squint, bend, or bring the note close to your face when you refer to it.”

We also suggested that she write cues in her notes—directions to herself such as “look up, then speak,” or “pause here” or “gesture, arm toward left” to help ease her nervousness.

One client noted that in an upcoming presentation he had two slides supporting one part of a message and planned to use them both. “Is that bad?” he asked, adding that both slides were well-designed and clear. Our answer? Yes, it’s kind of bad. It’s certainly unnecessary. If one slide captures and expresses the information well, showing a second depicting the same information wastes the time and attention of both presenter and audience. We suggested he follow the Goldilocks principle of “just right.” In his case, two were too many. One was just right.

You all had a few more concerns to which we’ll respond another time, but if you find yourself in need of a quick answer, call or email. We’ll reply. 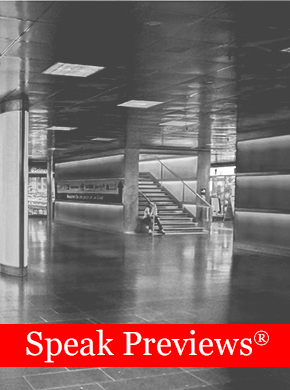