In a recent presentation, the speaker stood with one leg wound around the other, creating such an imbalance that she swayed back and forth. The audience soon began to wonder when she would topple. A subsequent presenter spoke with his hands shoved deep in his pockets, rhythmically jangling a collection of coins. His audience winced at every clank. One speaker stood hunched and bent. His hands flapped so rapidly that the audience became attuned only to their flight. Still another wrapped her arms around her body in a sort of hug, a stance that curved her shoulders, contracted her voice, and made her very small, indeed.

If you've seen a speaker adopt a posture similar to any of these, you know that they all create distance and distraction. If you've ever adopted such a stance, you know that it doesn't feel at all good. It produces an anxiety that affects the power of your delivery and the audience's reception of your message. It creates a negative image instead of the strongly positive one an effective presentation demands.

STARTING FROM THE BOTTOM

The foundation of a positive image is platform posture or stance. How you stand in front of an audience matters. Listeners "read" the message projected by your stance and will begin to process that message even before you speak. If you project an image of disorganization, uncertainty, or timidity, the audience will filter your message through that perspective—if it hears at all.

In casual situations, most of us are accustomed to leaning back or slumping forward, twisting a little to one side or placing one foot perpendicular to the other. We're accustomed to crossing our arms, to folding our hands in front or in back of our bodies, to resting a hand on the hip or under the chin. But when your stance makes you smaller, your message becomes smaller, too. If your stance lacks presence and power, so will your message.

To show from the outset that you are engaged with both audience and message, establish a balanced stance with your weight even but slightly forward, your knees slightly bent. Hold your shoulders back. Your feet should point straight ahead, not quite shoulder-width apart. Your arms should be down and relaxed at your sides. With practice, this posture will feel natural; you'll feel its positive effect almost immediately.

After a gesture, let your hands fall smoothly back to your sides to project ease with yourself and your message. You can move, walk across a stage, even step down an aisle into the audience, but punctuate movement with stillness. Any constant or repetitive motion, such as swaying or hand-flapping, is an annoyance that will distract your listeners' attention.

The image you need to project is one of competence, control, and engagement. Create that image to set a tone, to emphasize credibility, to remove barriers to understanding and acceptance. Doing so helps listeners focus intently on you and what you're saying—not on the change in your pocket or your potential as a contortionist. 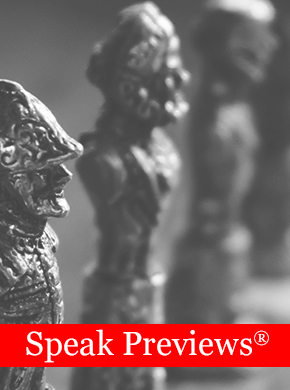