PowerPoint and other presentation software applications have often been vilified in the popular press. Originally designed as a user-friendly replacement for acetate overheads and Harvard Graphics, it has spawned numerous articles declaring "Death by PowerPoint" as a mortality threat in the modern business environment. But suggesting that life or death potential resides with PowerPoint overstates the power of the application and understates the speaker's responsibility to use the application correctly.

Used for the right reason, PowerPoint is a potent tool for presenters.

Is there a wrong reason? Yes, a big one: a speaker should not use PowerPoint as a script. An audience needs to see the speaker's face and hear the speaker voice the message, not the muffled echo of a speaker turned toward a screen reading or repeating what appears on slide after slide. Rather than rely on a slide deck for cues, depend upon rehearsal to help you internalize your presentation and a clear set of notes.

PowerPoint's suitable uses can generally be classified into four categories, each of which supplements the speaker's message.

Use slides to illustrate your messages and their support. For example, suppose you have done a statistical analysis of a workflow. Using PowerPoint's graph or table tools, you can illuminate the key points of your analysis by clearly showing the analysis on which you've based those points.

A diagram or chart can make an intricate process more easily understandable. Describing the mechanism of action of a particular molecule, for instance, may involve lengthy and complex explanations. A clear visual of that mechanism provides listeners an anchor for their understanding.

Accepting key messages and acting upon them often requires audiences to consider multiple interpretations of similar data. A presentation calling for a decision on market entry, for example, may include two distinct sets of data. Going to market immediately with a new product may carry x benefits and risks; delaying market introduction may offer y benefits and risks. Presenting visuals of the risks and benefits side-by-side or in quick succession will be more helpful to audience members than would a lengthy oral explanation of both sets of data and may lead to a better, more well-grounded decision.

Speakers must identify and then focus on the vital messages and support they want listeners to commit to long-term memory. PowerPoint allows you to display succinct, specific points; complement the visual by vocalizing those points in different words to increase the probability that they will be remembered. People commit information to long-term memory in different ways. By saying and showing the information, you will accommodate both those that learn best by hearing and those that learn best by seeing. The additional reinforcement of having both will benefit almost everyone, regardless of preferred style.

The real power in PowerPoint is its potential for making a presentation more audience-friendly. Use it well for your listeners' sake. 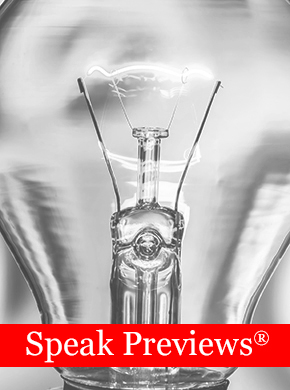