In times ancient, merely old, or suddenly new, people in various regions often celebrated a day whose purpose was to give thanks. For a bountiful harvest, perhaps - not simply a harvest of food, but one of love and friends and family, peace and health and hope, in whatever measure one may have experienced them.

Here in the U.S.A., that's the fourth Thursday of November.

Searching for quotations about "Thanksgiving Day" isn't all that fruitful. That's really too bad, for a quotation makes a great grabber in a text or presentation or, let's say, as the first words of a toast or greeting to family and friends before slicing up the turkey and digging into the stuffing. Quotations set the speaker up for a closing that threads back to the beginning.

The following quotations might make a good such beginning. Each speaks specifically to Thanksgiving Day and is likely to provide inspiration for your personal comments to friends and family.

On Thanksgiving Day we acknowledge our dependence. - William Jennings Bryan

Stand up, on this Thanksgiving Day, stand upon your feet. Believe in man. Soberly and with clear eyes, believe in your own time and place. There is not, and there never has been a better time, or a better place to live in. - Phillips Brooks

Quite fruitful, though, is searching, for "thanksgiving," the idea that gratitude is best practiced daily. Thus William Blake maintained that The thankful receiver bears a plentiful harvest. A proverb attributed to the Hausa of Nigeria sounds a similar tone: Give thanks for a little and you will find a lot.

Here are others that would serve as fine grabbers.

Gratitude is not only the greatest of virtues, but the parent of all the others. - Cicero

We often take for granted the very things that most deserve our gratitude. - Cynthia Ozick

As we express our gratitude, we must never forget that the highest appreciation is not to utter words, but to live by them. - John Fitzgerald Kennedy

Silent gratitude isn't much use to anyone. - Gladys B. Stern

No duty is more urgent than that of returning thanks. - Ambrose of Milan

Gratitude is the memory of the heart. - French Proverb

And here's one more suggestion, one that calls on you to fit together words written by others. Think of it as literary sampling on a grand scale.

The cento, a poem composed of lines and passages from other poems, can serve as a novel beginning, and in the following case, a firm closing.

Permit me to remind you, as Willkie Collins said, that I am now speaking the language of sincere gratitude, and that is essentially a language of very few words. For those words I turn to Shakespeare, who said everything so well: I can no other answer make but thanks - And thanks, and ever thanks.

Speak Previews® and the entire ECG team thank you, today and every day. 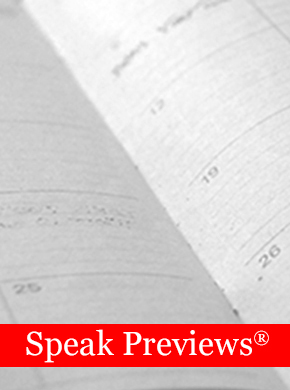